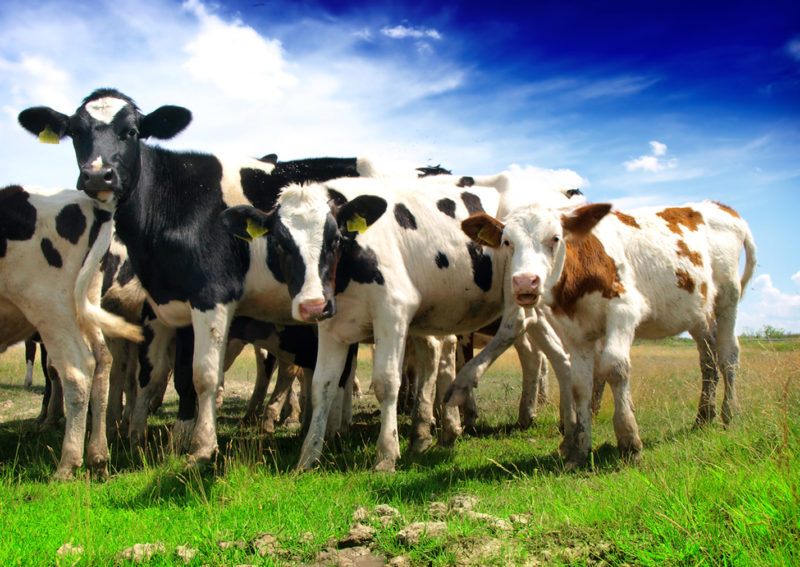 This month we present you with an article showing how beneficial microbes are being used for livestock health in the United States, and how the livestock industry is changing with the use of microbes that can reduce antibiotic use and improve growth and health.

Amy Mayer is a reporter based at Iowa Public Radio. This story comes from Harvest Public Media, a reporting collaboration focusing on agriculture.

On a cold windy morning, Kelly Nissen feeds the cows at the Iowa State University Beef Nutrition Farm. He weighs out specific rations and carefully delivers them to numbered feed bunks.

“When you’re feeding, you’re always double-checking yourself to make sure it’s going in the right lot,” Nissen says. It’s important — because these cows munch on more than just the common mix of hay, corn and distiller’s grain. They’re also charged with testing out different formulas developed by the researchers in the animal science department at Iowa State.

The government has asked drug companies to stop the use of antibiotics for growth promotion. And last year, the Obama administration announced a plan aimed at cutting down reliance on these medicines. Meanwhile, researchers like Stephanie Hansen at Iowa State have been looking for alternatives to antibiotics in animal feed.

Recently, they’ve been taking cues from human diet trends, trying an ingredient you can probably find in your fridge, inside that tub of Greek yogurt: healthy bacteria. No one’s going to feed pigs, chickens or cows Fage (Greek yogurt brand). But researchers think that a bacterium commonly found in yogurt, Lactobacillus acidophilus, could help keep animals healthy — so farmers don’t have to give them as many antibiotics.

“Acidophilus would have the same impact in a production livestock animal as it would in humans,” Hansen says. This friendly bacterium likes hanging out in guts — and once it settles into either a human or an animal’s gut, it thrives and multiplies, crowding out the other harmful bacteria that live there — which, in turn, can keep you, or a cow, healthy.

Poultry researcher Alejandro Penaloza at Oklahoma State University has a similar idea: He’s testing two strains of Lactobacillus in poultry feed. Some large chicken producers are interested, he says, because it helps the birds gain weight with less feed, a benefit they used to get from antibiotics.

“We cannot say that probiotics is the silver bullet to completely eliminate antibiotics,” Penaloza says. “But I am sure that they can help a lot.”

Researchers are still testing just how much of an impact probiotics have on livestock. But some animal feed companies are already marketing Lactobacillus supplements. Iowa-based Diamond V, for instance, has developed a pig feed supplement made from the bacteria.

Of course, these bacteria are no panacea, Frank says. “As antibiotics become more limited in their use, we’re going to have to make changes in how we raise animals, perhaps develop more vaccines, change our stocking densities, nutrition programs,” he notes.

Moving beyond antibiotics on the farm will be a gradual process, but it’s getting a little inspiration from our diet trends.

This article demonstrates the trend that is developing worldwide. Beneficial bacteria are responsible for 80% of an animal’s immunity, for digestion, and for the processing of nutrition. They reduce energy spent in digesting feed, increasing weight gain and improving Feed Conversion.

Efficient Microbes Pro-Livestock is a combination of multiple species of the natural bacteria that animals should be getting as a part of their diet in a natural environment. Efficient Microbes probiotics work to dominate the animal’s system, eliminating harmful bacteria and benefiting the system in a multitude of ways.

Pro-Livestock is registered with the Department of Agriculture as a natural feed supplement under Act 36 of 1947.

Click here to visit our product page for more information, or call Efficient Microbes for a free technical consult.